Most of the time, in situations like this, you don’t find anything worth saving.

I was down in New York, visiting my mom at her assisted living facility.  She and my dad moved there eight or nine years ago.

He has since passed, but she is still chugging along, as best as one can chug at 92 ½.

I was looking through a box in her closet when I came upon a letter, written by my dad to his sister. It was dated Tuesday, August 14, 1945 and written on U.S. Army Air Force stationary.

The war is over (as if you didn’t know).

Want to preserve this letter for posterity.

Everyone wild here – the outfit headed for town – including our officers. 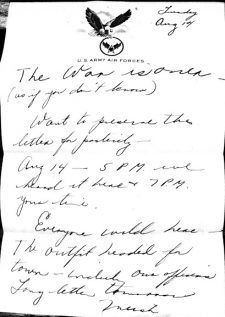 Like I said, most of the time you don’t find anything worth saving – this was the exception.

First, because it was just plain cool to hear what my dad sounded like as a 24-year-old.

Second, because it’s tied to a huge event – the official end of WWII. And while not quite a Dead Sea Scrolls level of discovery, it still feels like I unearthed a little piece of history.

And finally, it’s a note whose value has increased exponentially over time:

When written, it was completely unremarkable. Just a letter home from some kid in the army.

You’ll be pleased to know that when it comes to selling a professional service, the best marketing works the same way (and it doesn’t take 73 years).

You need to stay steadily visible

This past week, I was rehired by two different former clients. One from five or six years ago; one from it’s been so long I don’t even remember.

… they reached out to me.

… there was zero discussion about my experience or qualifications.

… my “proposal” consisted of a few casual emails back and forth.

I hope you’ll agree that when it comes to getting hired, that’s about as good as it gets.

Well, partly because I am so good looking, of course. But I have a more reality-based theory: It’s because I’ve stayed visible to them.

They subscribe to this newsletter. I’m active on LinkedIn. I send things via snail mail. I get together for coffee. I reach out with an occasional email to say hello.

First, none of these activities, individually, makes any difference.

By themselves, they are the marketing equivalent of a letter home scrawled on a random piece of paper.

Nothing memorable, nothing worth talking about. But taken together, over time, they are huge. It’s their cumulative effect that matters.

Second, in all cases, I’m not trying to sell anything, today.

And yet, in all cases, I’m trying to sell something, tomorrow.

It’s a long term play. Like my dad’s letter, the value grows over time.

The truth is, if you and I just met, of if you happened to google, “penguins love marketing communications” and found your way to my web site (don’t take my word for it, try it), I don’t really want you to hire me today …

… I want you to hire me in three years.

After you’ve checked me out.

After you’ve seen me pop up on your LinkedIn feed 50 times.

After you’ve finished reading the most recent edition of this newsletter, looked over at your long suffering business partner and said, “I don’t know what that penguin guy is smoking, but we need some of it around here.”

But what about capability and selling skills and elevator statements and persuasive web sites and proposals that move prospects to take immediate action?

All fine and good. But guess what?

The better I know you, the less any of that matters. Particularly if it’s a past, happy client.

At that point, it’s just a simple back and forth between friends, trying to figure out if we’ve got a match.

Bottom line. There’s an old saying that goes, “The best time to plant a tree is five years ago.” It’s clever, but if you need shade today, it’s kind of annoying.

It’s the same with marketing. If you need clients right away, all this slow burn relationship building stuff is not the first place to look.

That said, if you plan to still be around in three or five or twenty years, it might not be such a bad idea to drop some seeds right now.

I know that’s what my dad would do.

10 thoughts on “A Blast From The Past”