This time of year, in this part of the world, it’s hard to avoid baseball.

It’s on all the screens in all the bars.

It’s on the waiting room TV at my local hair replacement clinic (I was picking something up for a friend).

And so while I’m normally not particularly interested in the game or the outcomes, I’ve spent a fair amount of time this past month watching baseball.

Yesterday, and for the first time after all these years, I noticed something:

If you’re righthanded, you wear your glove on your left hand and you throw with your right. If you’re lefthanded, it’s the reverse.

I’m no Abner Doubleday, but this seems backwards to me.

First, because catching strikes me as way harder. You’re running, you’re jumping, you’re tumbling (often, all at the same time), all while doing your best not to slam into walls, other participants, and the occasional hot dog vendor.

Throwing? Well, I’m not saying it’s easy, but in most cases you are standing upright and repeating a motion that you’ve done in exactly the same way a thousand times.

Second, because catching is more important. You have to field the ball before you throw it. If you blow the catch there is no throw to be made.

And, since you’re always throwing to a teammate, maybe if he/she were wearing the glove on their dominant hand, you could afford to throw a little less accurately because they’d be a little bit better at catching. 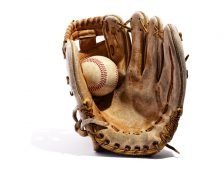 Which is why first thing Monday morning I intend to … do nothing.

I’m not going to call up Major League Baseball headquarters and ask to speak with somebody in charge.

I’m not going to start a grassroots movement of “Lefties for Left-Leaning Gloves.”

I’m not going to post a persuasive video on Tumblr (whatever the hell that is).

Why not? Because it’s a waste of time. Right or wrong, the world of baseball gloves works the way it works and I’m not going to change it.

When it comes to deciding which professional service(s) to sell, you are faced with a similar choice:

Either try to convince people that you are right – that they need what you are offering and here’s the 10 reasons why – or (recommended), find demand that already exists and shape your services to fit that.

Are You Asking the Right People?

Last week, somebody contacted me with a question regarding an email service that he was thinking of developing and offering to doctors. He wanted to know if I thought it was a good idea.

I said, “I don’t know; I’m the wrong person to ask. What you want to do is talk to doctors. Because if they’re not interested, it doesn’t matter how you package it, how you describe it, or how you price it. Nothing is going to happen.”

His approach – ask an “expert” (or a colleague, or a relative, or your know-it-all brother-in-law with the fancy MBA) – is not unusual. It’s not even illogical.

It’s just not nearly as valuable as asking people who look like those that might ultimately buy your service. They write the checks, so theirs are the opinions that matter the most.

How do you get their input? Try this:

Eventually, one of two things will happen:

Most of us intuitively appreciate the value of getting input from other people when developing something new.

The problem, however, is that many people forget to focus on the input that matters most: the potential buyers of your service.

As Abner Doubleday famously said, “Nothing happens until someone sells something,”