I won’t lie to you – horses kind of scare me. They are just so immense.

Of course, there are other large animals out there too. But you don’t often find yourself standing next to them.

Or, as happened to me recently, climbing onto their backs and riding them (whose idea was this?).

We were out in Western Colorado visiting my wife’s college friend Edie.

Edie and her husband, Gary, live up in the hills at about 7,500 feet. They are very resourceful – the kind of people where if you dropped them into a remote forest with nothing they would have power going in about a week.

And so it should come as no surprise that they own horses. Two, to be exact.

Now lest you think I’m a horse virgin, I want you to know that I have ridden these behemoths in the past.

But it was always as part of a “trail ride.” You know, where you show up at a farm, pay $20, and they lead you around the stable area on a geriatric steed named “Widow-Maker” or “Lightning.”

That’s not what this was.

On our first day there, Edie asked if I wanted to “go for a ride.” I naively assumed she meant in the car, to get ice cream or something.

Next thing I knew, I was putting my left foot in the stirrup and hoisting myself up into the saddle. 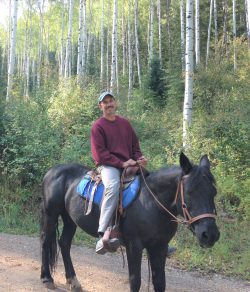 The next 90 minutes were the highlight of my trip (maybe my life).

She led us up into the red stone hills, occasionally stopping on the edge of a cliff and just looking around. It was amazing.

You know what’s not at all like riding a horse? Driving a car.

Yes, they both can be used as a way to get from here to there. But one has a lot more uncertainty attached to it.

With a car, and barring any unforeseen incidents, you go exactly where you want to go at precisely the speed you choose.

Not so with a horse, particularly when you’re a novice like I am. My horse stopped to eat, walked beneath low branches, and even occasionally took off in a run. I may have been riding, but she was doing most of the driving.

Your business is a horse, not a car

Running your own business is more like riding a horse than driving a car. This is an unwelcome surprise to a lot of people, particularly those who are new to life as a solo.

From the outside looking in, other people’s businesses may seem “car-like” to you: smooth, steady, predictable. It appears as if they are just putting their foot on the gas and moving ever forward.

It’s an illusion of course, but like most good illusions, you can’t tell.

You, on the other hand, and thanks to your “view from the inside” regarding your own business, feel like you’re riding a wild animal. One day it’s fast. The next day it’s slow. Sometimes it stops without warning, only to suddenly take off again.

A horse is not a machine – you’re never in complete control.

The mighty beast has its own agenda. (Let me just pause here to say that “Agenda of the Mighty Beast” would be a great name for a band). You can exert some influence, but at some level, it’s going to do what it’s going to do.

I tell you all this for one reason: I want you to spend more time riding and less time worrying and wondering. About things like . . .

Why is that guy’s business doing so much better than mine?

Why was I so busy last year this time and now I’m not?

How come things aren’t the way I expected?

Simple. Because you’re driving a horse, not a car. Unpredictable, occasionally frightening, and outside your complete control – that’s just the way it is.

Can I give you a way to remove all the risk from your horseback riding adventure (aka, your business)?

But I can share with you the same advice Edie gave me as we were leaving the barn: Stay loose, don’t fight the horse, and make sure to look around and enjoy the view every once in a while. The ride will be over sooner than you think.

12 thoughts on “The Nature Of The Beast”