Unless you’ve been living under a rock (and if you have, I mean no disrespect), you probably heard about the embarrassing mistake that occurred during last Sunday’s Academy Awards ceremony:

Jimmy Kimmel was hired as host.

The mistake, of course, is that when it came time to present the award for best picture, the wrong envelope was handed to presenter, Warren Beatty.

As a result, the award was erroneously given to La La Land rather than Moonlight, the true winner.

It was amazing to watch. And fascinating. And memorable.

Not so much because it happened in the first place (it’s easy to see how it could have). Rather, because we all got to watch as it unfolded on live TV.

There was Warren Beatty, a man whose entire career has literally been scripted, suddenly faced with having to make a decision in real time about what to say – or, as it turned out, not say – to tens of millions of people.

But I suppose we shouldn’t be surprised that there has been so much buzz about the mistake. The Oscars have never been about who wins; you can read about that the next day. 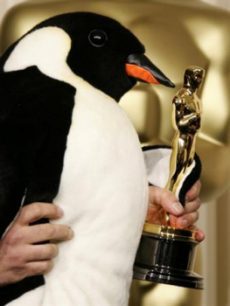 It’s the “off script” things that make them interesting:

Matt Damon reaching over the seat in front of him and tugging on Casey Affleck’s man bun.

Mel Gibson straining to appear pleasantly sane as he was being made fun of from the stage.

And this year, in what may be the best Oscar highlight ever, the confusion and adlibbing which necessarily occurred following the best picture gaffe.

Your marketing needs to go off script too

Here’s something I’ve noticed about how different businesses market their services:

If, on the other hand, you sell something that looks nearly identical to that of your competitors – financial services, management consulting, life coaching, recruiting, HR – chances are, your marketing is equally undifferentiated.

Nothing too odd. Nothing too personal. Nothing that has even the slightest chance of being slapped with the dreaded “unprofessional” label.

Not that you asked, but I think that’s totally backwards.

If what you sell isn’t easily differentiated from the competition – and sorry, telling us that you, “listen closely to client needs and offer highly customized solutions,” doesn’t even begin to move the yawn needle – don’t you think the way you present it and talk about it should be?

Here’s the bottom line. An Academy Awards show absent any awards wouldn’t amount to much. And yet, it’s the unscripted, personal, unexpected happenings – not the awards themselves – that grab our attention and keep us engaged.

It’s the same with you and your marketing.

If you weren’t skilled at financial services, management consulting, life coaching, recruiting, HR, or whatever it is you do, nobody would hire you.

But if that’s all you’re willing to reveal, I can promise you one thing: Nobody’s going to be talking about you when they wake up tomorrow.

In 50 words exactly, what do you think Warren Beatty should have said or done when he realized what was in that envelope?

If you liked this article you’ll love the next one. Click here to sign up for future posts and get a free copy of my report, “The 5 Biggest Blocks to Writing a Monthly Newsletter (and how to overcome them right away).”

21 thoughts on “The Benefits Of Going “Off Script””