I guess I hadn’t given much thought to the weather.

I heard something about snow coming, but it was far from top of mind as I headed out that Saturday morning for an all-day event at the New England Speaker’s Association.

But when the event began, the first thing out of the meeting organizer’s mouth was, “SNOW! WE’RE ALL GOING TO DIE!” (It’s possible I am exaggerating.)

She did say, however, that due to the coming storm, we’d be ending early, at mid-day.

It didn’t look too bad when I got out to my car at 12:30; just a couple of inches to clean off. The highway, though, was a different story.

The road was very wet and slippery. And even though the average speed was only about 30 miles per hour (that’s 86.5 farthings per haggis, for those of you on the metric system), it felt very unpredictable.

So I got off the highway, figuring it would be more controlled and safer on a secondary road.

Big mistake. It was even worse. Cars sliding all over the place; I passed two separate accidents in the space of five minutes.

An hour later, still driving as carefully as I could manage, I found myself unable to get up a short but steep hill.

I tried all of my New England snow-driving tricks. I downshifted to second gear, and then first. Nothing.

I turned the wheels all the way to either side, in the hope of finding more traction. That didn’t work either.

My wheels just spun in place; I was soon sliding slowly backwards, like a portly pig on a greased maypole (or whatever). 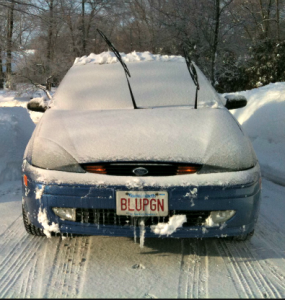 Here’s the interesting thing. Yesterday afternoon, I drove that exact same route home. Except this time it wasn’t scary, it wasn’t dangerous, and it wasn’t difficult.

Same driver in the same car on the same road. But without the snow, a completely different experience.

The same principle applies to your marketing…

Success depends on more than just you

I spend a fair amount of time helping solos and small businesses market themselves better. Improving their web sites, writing their newsletters, developing their offerings, coaching them on how to leverage their existing relationships.

It’s all important stuff, but … it only works if the “weather” doesn’t get in the way.

If nobody wants whatever it is you’re selling, I don’t care how good your marketing is or how experienced and capable you are relative to the other guy. If there’s no demand, you’re not going to get much traction.

Strong demand, on the other hand, makes life wonderfully easy.

Have you noticed, for example, that Bruce Springsteen doesn’t do much advertising? They just announce the concert date, open the door, and people come rushing in. I don’t know what’s on his LinkedIn profile, but I’m pretty sure it doesn’t matter.

Here’s the bottom line. I love marketing. And done well, I’ve seen it change people’s businesses from loser to winner.

But for it to succeed, it requires somebody (preferably, a whole lot of somebodies) to want whatever it is you are selling.

Your job, therefore, and before you get too caught up in how you describe and promote your work, is to first make sure that there’s a real need out there. And if there isn’t, to reconfigure your offerings to line up with existing demand.

Can you succeed without high demand? Sure. You can drive 20 miles in a snow storm too. But given the choice, I’ll take clear weather any day.