After years of collective child-birthing, child-raising and “When is this child ever going to leave the house?”, the first member of my family’s next generation – my 11 nieces and nephews plus my own three children – has finally gotten engaged.

Yes, for those of you keeping score at home, my nephew, Travis, is poised to break the tape at the single man finish line, on a date not yet determined.

This is big news. Unlike during the late eighties and early nineties when Linda and I attended more weddings than Larry King’s caterer, I don’t think I’ve been to one of these events in at least 10 years.

Back then, however, we and our friends were so caught up in the engagement scene that shortly after ours was over, I ended up writing a book about it: The snappily (if not briefly) titled, Congratulations … Your Girlfriend’s Engaged. The Ultimate Survival Guide for Grooms To Be.

And so, knowing that Travis was about to enter the engagement zone himself, I went down to the basement and unearthed one of my few remaining copies, to send.

Naturally, I first had to give it one more read.

Was it still funny? Please. I spit my coffee out several times from the sheer hilarity of my own decades-old wit.

Was it still useful? Pretty much. Even 25 years later, weddings still involve tuxedos, in-laws, cake and strippers (hopefully not all at the same time). 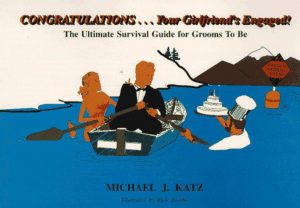 But you know what really stood out the most? The outdated cultural references that I made within:

And, of course, the conspicuous absence of online anything when discussing the various logistical tools and tactics of a successful engagement.

And yet, the very things that make it feel so outdated are precisely what made it feel so relevant in 1992 … a fact that relates directly to your own writing.

Consider Evander Holyfield, for example. Today, I doubt that many people under 30 have even heard of him. But in the early nineties, he was heavyweight boxing champion of the world. Everybody knew of him, whether or not you followed boxing.

And so by mentioning him, along with all the other now dated specifics, the book came to life. It wasn’t just information, it felt timely and relevant.

Try this in your own writing to achieve the same effect:

Here’s the bottom line. Business writing stopped being about information 10 years ago.

Today, with everything you’d ever want to know just a Google search away, lead generation is dependent upon making an authentic connection … with newsletter readers, web site visitors, e-book downloaders or social media followers.

Real-time specifics are a key to cutting through the blah blah and being remembered.

If you liked this article you’ll love the next one. Click here to sign up for future posts and get a free copy of my report, “The 5 Biggest Blocks to Writing a Monthly Newsletter (and how to overcome them right away).”

38 thoughts on “Is Your Writing Evergreen? I hope not.”