By any chance, have you been following the upcoming U.S. presidential race? (Note to non-Americans, please keep your laughing to a minimum; it rattles the candidates.)

For any number of reasons – nearly all of which I’m not going to get into – it’s been, shall we say, unusual, relative to prior races.

There is one thing in particular that’s caught my attention: This time around, the primaries really matter.

Not just the primaries in general, either. I’m talking about the procedures by which the primaries are conducted and the delegates awarded.
With so many contentious and (often) close battles, these procedures have made a big difference.

Add to that the fact that the rules – in both parties – read like they were hastily agreed upon by a bunch of third-graders eager to turn anything in just so they could hurry out to recess, and it’s all pretty confusing.

I don’t claim to understand most of it.

But I have noticed that on the Republican side, it’s more of a “winner take all” system, whereas the Democrats prefer something closer to proportional allocation.

Which is better? I have no idea. 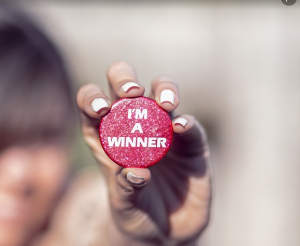 But I can tell you this for sure: When it comes to getting hired by a prospective client, the “winner take all” model is what you’re up against.

Clients go outside their organization to hire professionals when they believe they have a problem that they can’t (or don’t want to) solve themselves.

At that point – and it doesn’t matter if they are looking for legal, financial, consulting, coaching, writing, plumbing or whatever type of help – they start looking for the best solution that they can afford.

What’s the definition of “best?” It varies, of course. But however it’s defined in any particular case, the key point is that it’s singular.

They’re not looking for the best three firms that can help them. They’re not giving some of the work to one person and some to another. Like a Republican primary, it’s winner take all.

For you and me that means that coming in second a thousand times is no better than not being considered at all. Only Mr. or Ms. First Place Finisher gets hired – everybody else goes home empty-handed.

As a practical matter, that suggests two things for the way you think about and market your business:

Here’s the bottom line. In a winner take all world, there’s no such thing as partial credit; either you get hired or you don’t.

Narrow your focus and ignore the people who don’t fit inside of it. With any luck, come inauguration day, we’ll all be cheering for you. (And believe me, given some of the options, I’d vote for you right now.)

16 thoughts on “Are You White House Bound?”