I’m not sure how it got started; I think initially someone was just making a joke.

But somehow, five or six years ago, a bunch of men that I play basketball with decided to hold a year-end, “Secret Santa” event at our local bar. We had a blast and agreed to make it an annual occurrence. 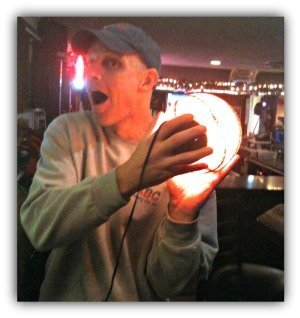 Past gift highlights include a lava lamp, a mostly empty can of paint, a single work glove, a metal bucket with a hole in the bottom, half a hammer, and a (highly coveted) light up, rotating, disco-basketball.

If you’re not familiar with the Secret Santa concept – and there are many variations – it works as follows:

Toss in a few pitchers of beer and let me just say that on a pure, belly laugh-per-minute basis, few activities score higher than watching a bunch of sweaty, middle-aged men posturing over meaningless garbage (insert your own Congress joke here).

In terms of coming home with the gift you want, however, it’s not all that effective. Any selection process that compels you to choose blindly, without knowing what you’ll end up with, is bound to lead to disappointment.

And yet (here comes the useful business segue), this approach is not far off from the way many solo professionals select clients: We take whatever we can get from the pile, without giving much thought to what’s inside the package.

Many professionals, particularly when just starting out, feel like they can’t afford to be selective. “A client’s a client; I’ll worry about being more focused and selective later.”

The problem, of course, is that later never arrives, and you end up bouncing from one inappropriate (for you) client to another. They’re not necessarily bad people or bad companies, it’s just that by never defining exactly what you want and with whom you work best, you keep ending up with whatever’s in the pile.

So try this instead. Take five minutes, right now, and write a description of your perfect client.

Not some broad and vague industry or demographic group either (e.g., “small to mid-size manufacturing businesses”). I mean describe your perfect client in detail – enough that you can recognize them when you see them (here’s my description, as an example).

Then, start looking for and talking about those people as you attend networking groups, participate in social media, write your newsletter/blog, talk about your work, etc.

Do that and pretty soon, if you’re clear enough and consistent enough, those people start showing up and your client base becomes both more focused and more suited for you in particular.

Here’s the bottom line. With 2014 just about over, this is a good time to think about who in particular you’d like to be working with in the coming year.

You can blow with the wind and take your chances or, you can give it some serious thought right now and bring home that light up, rotating, disco-basketball you’ve had your eye on all night.

11 thoughts on “Who’s Your Perfect Client?”